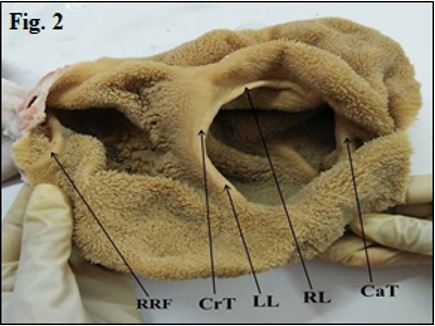 Goat is mainly reared for the milk and meat purpose. The quality and quantity of milk and meat are dependent on digestive system. The goat is ruminant animal and the Rumen has special role in the digestive system. For the present study, fresh ruminant stomach of six healthy adult Surti goats were procured from the local abattoirs of Anand. After separating the rumen, different biometrical studies had performed. The mean ± SE value of weight of rumen was 704.92±26.60 gm. The mean ± SE values of longitudinal circumference of dorsal sac, longitudinal circumference of ventral sac and transverse circumference were 44.87±01.43 cm, 50.42±01.65 cm and 54.95±1.68 cm, respectively. The mean ± SE values of papillae counted per cm² area of dorsal sac, ventral sac, dorsal blind sac and ventral blind sac were 69.67±04.63, 100.67±02.49, 81.50±06.39 and 88.33±05.89, respectively. Numbers of papillae were more in ventral sac than the dorsal sac and both the blind sacs.

India ranks second in Goat population (according to 19th LIVESTOCK CENSUS-2012, GOI). The current growth of interest in goat husbandry has been motivated by the increasing demand of the goat meat. The demand of the goat milk and milk products are also increased because of the composition of the goat milk having therapeutic effect in some human diseases. Surti goat breeds are usually distributed in surrounding areas of Surat, Baroda and Nasik of Maharashtra. The best part of this breed is, they can be raised under stall fed conditions as well as extensive grazing. Surti goats are excellent dairy goats when compared to other goat breeds. Surti goats are raised for both milk and meat. However, they are popularly known as “Dairy Goats” (www.GoatFarming.in, 2016). The rumen acts as a “Fermentation Vat” and known as the “Paunch” where large population of micro-organisms act on the ingesta, perform at least three important functions: protection, metabolism and absorbtion (May, 1964).

The present work was carried out at the Department of Veterinary Anatomy and Histology, AAU, Anand. The stomach was separated by cutting at atrium ventriculus cranially and pylorus caudally and collected immediately after slaughter the goats. After separating the rumen following biometrical parameters was measured with the help of non-stretchable thread. The circumference of rumen was taken as longitudinal circumference of dorsal sac of rumen, longitudinal circumference of ventral sac of rumen and transverse circumference of rumen from the middle of dorsal sac, middle of ventral sacs and middle of rumen transversely, respectively. The numbers of ruminal pillars were counted after dissecting out the rumen and distribution of ruminal pillars was observed (Fig. 2 & 3).  The counting of number of papillae was done per 1 cm² area of dorsal sac, ventral sac, caudo-dorsal blind sac and caudo-ventral blind sac.

The results of the present study have been given in Table – 1 and discussed under as follows: The present observations on weight of rumen are higher than the observations of those reported by Jelinek (1995) in young goats (603.0±36.09 gm). This variation in the weight of rumen may be due to the difference in the age and body size of goats. The present findings on transverse circumference comparatively lesser than the observations reported by Jelinek (1995) in young goats (72.50±11.61 cm). It might be due to the breed difference. The observations on counting the number of papillae per cm² area (of dorsal sac/ventral sac/dorsal blind sac/ventral blind sac) appeared to be more than double in all the ruminal sacs as compared to that reported by Lakshmishree (2014) in local breed of Bidar goats (29.9±1.77). It might be due to the breed difference.

Lakshmishree, K. T. (2014). Gross and Histomorphological Studies on Forestomach of Wild Ruminants in Comparison with Domestic Ruminants. Retrieved from krishikosh.egranth.ac.in. 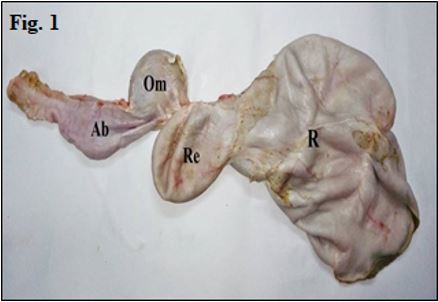 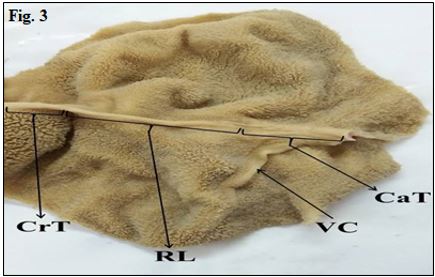